Over 200 delegates: 20 nations represented; 34 speakers – and an articulate and eloquent debate, with some measure of agreement that government and industry need to partner more closely, but no really crystal clear roadmap as to how to achieve that – yet.

“There are questions in every aspect of the cyber defence domain – questions we have yet to resolve. For example, I was meeting recently with some major banks and they were quite surprised to learn that defending [their IT systems] is not currently a task for the military.”

“Tactical ISR – that is Big Data in practice!”

“The cyber issue is everywhere – it is pervasive and accelerating – and that is a problem for government: our systems and processes are not keeping pace.”

“Outsourcing [of generic or specific IT functionality] is not the optimal solution: but partnership perhaps is. I believe our ability to bring in the true partnership we need between government and industry is our secret for success.”

“The leadership needs to pull back responsibility for transparency from the lawyers – because at the moment it is not working.”

“Cyber is the ultimate democratisation of conflict.”

“Whenever there is a problem, it is a people problem.”

“I worry about the future – about what I will be asked to fix. That is the biggest part of my real job.”

“We have forgotten about symmetric warfare. We need to be planning for a borader range of contignencies.”

“We face a new kind of warfare – chaoplexic warfare in which chaos provides the metrics rather than energy or effects.”

“The current situation [in Europe] is beginning to look more and more like that just before the First World War: it is a total mess everywhere.”

“Russia has just appointed a new Parliament: ‘elected’ is too strong a word for the process in which only 16% [of the electorate] voted.”

“The ‘Airbag’ model of cyber defence: “If it happens, make it hurt less!”

“Society wise, we are still in the Wild West era,” in response to “is it not more likely a hostile cyber attack will be made against civil rather than military infrastructure?”

“We need to be investing in active disruption,” in response to “should be focus investment in defensive or offensive cyber capability?”

“There is an arc of insecurity and instability along NATO’s periphery and beyond, especially to the east and south.”

“Interoperability is not all about technology: it is maybe 10% technology and the rest relies on our understanding and ability to work together.”

“Agility is the most important factor. Cyber needs to move faster from the technology to the operational domain: nothing is static.”

“Innovation money no longer lies with government: it is with industry. The IT industry in Silicon Valley alone has more than $100 billion a year [to fund innovation].” 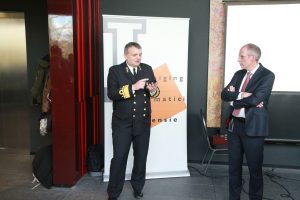